You are here: HomenextIntergenerationalnextChildren and older people performing together - an introduction

Children and older people performing together - an introduction 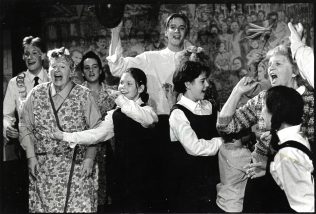 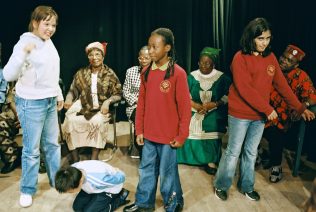 All the shows were developed from the memories of older people who worked with the young people on improvisations and eventual scripting. Some shows featured children and older people performing together, in the case of the older people often for the first time. A partnership developed between the Youth Theatre and the Good Companions, the older people’s theatre group established at Age Exchange in 1992-3, and the two groups often performed together. Some examples of this work can be seen in this section of the website.

Pam Schweitzer went on to work with Jennifer Lunn from 2004 onwards on inter-generational shows in local Blackheath and Woolwich primary schools and older people’s community groups who wished to perform their memories. The groups involved, COFA Caribbean Elders Group and Ajoda African Elders Group, also went on to develop their own shows, performing at local festivals and community events.