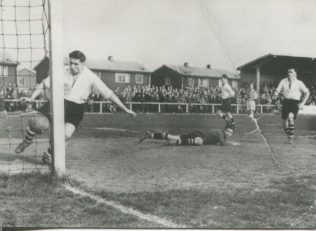 Pauline: I think is the 23rd of June. Am I right ? This is Mr McLoughlan.

Pauline: Alfred Mc Loughian on Middlepark estate -talking, first of all, about Hornpark estate. O.K. so first of all actually you were born where?

Alfred: Yes. I lived in Well Hall, and spent my boyhood in Well Hall. Went to Gordon school. And then of course, as a boy, I travelled all round Middle Park – the Westfields, the Ninefields, Park and all round this area.

Pauline: So when was middle park built?

Pauline: And you saw it being built?

Alfred: Yes. I knew it as fields and er, hedges. And er, cattle grazing up here when er, before it was built, yes.

Pauline: So what was it like before it was built?

Pauline: Down from what road in Eltham?

Pauline: From Eltham Church down …?

Alfred: Yes. From Eltham. Past the White Hart. Er, there was er, a farm on your right which was the er …  Er, I can’t remember … Lime Farm Park. Lime farm. Lime farm … that was it, on the right. And then there was cornfields going right down to Eltham Green. Then on the left there was all fields with hedges. And when you got down to the bottom there was a (019 ) where The Dutch House is now. Er, the Yorkshire Grey is now , there was a five bar gate with a lane, leading up to Middle Park Farm. And you could see the farm in the distance. Erm, Oak trees either side, big oak trees either side used to lead up there. And the fields came off of them. You could see cows in the fields and horses but he he did mostly horses I think. And erm, and er, from er, well it was all fields, just like any other farm.

Pauline: And were there private houses at all?

Alfred: Er, no, erm, the only houses – there were no houses there at all – the only houses I remember were at Cliff … what is now known as cliftons, roundabout. At cliftons roundabout. At Cliftons roundabout there was a road leading up from the main road, the Eltham Rd, called Mottingham Lane. And it used to go under the railway bridge, turn right, and go up to Mottingham. But On the crossroads, at Cliftons roundabout now, there was two farm cottages one side of the road and three farm cottages the other side of the road. And then there was a track leading up the hill that went over a cow bridge at the top – up towards Tucks Farm or Horn Parks farm at the top.

Pauline: And what was peoples attitude to Middle Park being built then? The people who lived here?

Alfred: Er, well the only houses that were round there then was Eltham Green there – there was a few houses there. I don’t think people really thought much about it, because all the estates were being built then you see. This was after the war and er, the estates were all in the process of being built – The Pages Estate and The Middlepark Estate and The Hornpark estate were all built one after the other.

Pauline: And why were they built at that time?

Alfred: Erm, well I suppose er, war time, The First World War, they built the Progress Estate at Well Hall – to house the munition workers in The Arsenal. And they also built wooden huts. Well all the wooden huts were knocked down.

Pauline: Where were the wooden huts?

Alfred: On the Well Hall Road leading up to Shooters Hill. And er, all over Westmount Rd area, (046). Erm, Deansfield Road.  All round that area. Er, Castlewood Park.

Pauline: Did you ever go in one?

Alfred: Oh yes. Yes. I had many friends.

Alfred: Oh quite good. They had about four rooms.

Pauline: What, all on one floor?

Alfred: All on one floor. Yes. Wooden hut yeah, with a coal bunker outside. And er, they were quite comfortable for munition workers. And I think they …

Alfred: And were the walls plastered inside or were they just wood ?

Alfred: No. They were like a erm, asbestos inside.

Pauline: That was healthy.

Alfred: Well, nobody used to think of it then.

Pauline: And how did they heat them?

Alfred:Er, they had round fires, round stoves with pipes going through the roof.

Alfred: Sounds a bit Russian really ? Like a Russian house.

Alfred:     Yes, well they built them in a hurry didn’t they for the munition workers.

Pauline: But they were quite warm and comfortable were they?

Alfred: Yes. Eltham was a village before that. Before the war. And of course it was a small er … small high street – you know, that er, zig- zagged. And of course after the war, with the influx of these munition workers, made this area grow up. So er, all the fields that were round here, they started building these estates.