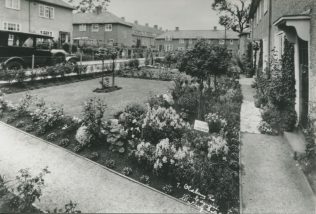 Flo:     I moved here from Poplar. From Blackwall Stairs in (Prestons Row/Road).

Flo:     Yes. I remember that we had no bathroom. We had a tin bath which we had every Friday night and the first one in was lovely but you know …  First of all it started off with me. And then five years after I had a sister and then three years after I had a brother and in the end we ended up with six.

Flo:     Well, hotted up, topped up. I mean because you had to heat the water by kettle then didn’t you. You never had hot and cold water. So the first one in had a lovely, lovely one you know. No bubble bath. And then my Mother moved from there down to (016 ) Rd across the way there. We moved in there the first of April. April fools day we moved there in about 1924 or 25 I think it was.

Flo:     Well we got an exchange because the buildings that we lived in belonged to the G.L.C. in Poplar and we was exchanging, someone exchanged with us. And they went  back to Poplar.

And how many rooms, in Poplar?

So there five of you in Poplar. How many rooms?

Flo: Two. And a kind of a kitchenette come scullery affair with a sink in it and two bedrooms.

Pauline: And a toilet outside?

Flo: No. Fortunately we had a toilet inside then. But when I first started life I can remember when … because I started school when I was three in Poplar. And we lived upstairs in two rooms. And then my Mother had Doris there and then we moved to the buildings in (032     ). And then I suppose the family was growing and we came down to here. (034    ) We had a bathroom, I always remember that and we had a pantry which I’d read about in books then as a child. You know read about a pantry. And they said, “this is the pantry”. And I wrote to my friend in Poplar and I said, “we’ve got a beautiful house and flowers in the garden – because somebody had lived there before us – and also we had a pantry. And a bathroom …” You know, it sounded so posh. And Dagenham was lovely when we grew up.

Tell me first of all, what can you remember about living in

Poplar as a child. Did you have a garden to play in?

Flo: No. We had an area in the buildings. And we was right facing the local (? chipping) … for the waste rubbish to go on to The Thames because we looked out of our bedroom window and you looked on to the Thames. And you could see all the tugs and the boats going by. And the dustcarts used to come along and go in and they were all emptied in a shoot to a barge and took down The Thames. We’d sell that. I mean when your that age you don’t really. Well we never had green grass and lawns and things.

Flo: Quite alright I think. I belonged to the church on the corner. There used to be a church on the corner, St Nicholas. I think that was our main attraction. Sunday school and things like that. I used to church … ooh I think about three or four or times on a Sunday with my an. Because my nan lived in the same building as my Mother you know. And yes I think the people were quite alright you know.

Apart from your Grandmother did you have any other relations living here?

Flo: I remember I had an aunt (063       ). I can`t think of any others. My mother’s sister … only had one sister my Mother. And she lived in Wiltshire. And she married a soldier in the First Wold War and he came from Wiltshire so naturally enough when the war was over and he was fortunate enough to come back she went to live in Wiltshire.

What was your Father’s job?

Flo: My Father worked for the P.L.A. – Port of London Authority – in the docks. As I said to Jean we never knew poverty like some did that run about with no shoes on things like that because his work was regular at the docks. You know he worked for the P.L.A.  He came out of the Navy after the First World War and went straight in to that. And he was kept on a bit longer because of the Second World War, he didn’t retire until was nearly seventy. But I mean there was a lot of poverty about in Poplar. I mean kiddies used to run about with no shoes on and we used to have a fortnight at Ramsgate every year. We used to go down on the Royal Sovereign and I can picture my Mother now. A black skirt with a white blouse, rather big busted. And I remember she used to keep her purse down her neck. It was the safest place to keep it.

And you’d take the food with you would you?

Flo: Yes. I remember we did have a holiday, a lot of children didn’t.