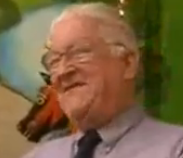 I went to a little school in Tranquil Passage. I think it was a library at one time. All Saints Infants. We used to come out of school and across the passageway we used to go to see Mr Pofly, who used to supply us with sweets. And further along the passageway was Hammond the shoe repairer. That was on the same side as the school and further along where you would be facing the Crown pub across the road was Mrs Wheelers little sweet shop. That’s where we used to go for our sweets. I can remember farthing blackjacks and ha’penny sherbets.

We started school at three years of age and we used to sleep on little canvas beds in the afternoon for about an hour or half an hour.

Up on the heath, opposite All Saints Church, that used to be a dip. Rather a large dip, but it was filled in with bomb rubble after the war and I saw them actually building an air-raid shelter. If you stand at the top of the village and face All Saints Church the right hand corner of that green, that’s where they built the air-raid shelter. And further across the heath, past The Hare and Billet, going towards the orchard to the right, that of piece of heath there, there’s beautiful sand there. They dug up part of the heath there and filled sand- bags just before the war.

We lived at number 6 Collins Street, myself, my mother and father,  and next door was my grandmother at number five and at number four my aunt and uncle so we had three of those terraced houses. All family, as it were.

In 1938, over on the part of the heath where Blackheath Vale is there used to be a row of terraced houses to the left of the road as you go down, a German aircraft crash-landed there. I think it had diplomats who were making their way to Croydon. Rumour had it that they thought it was Croydon airport but I can’t see that with a crash-landing. I remember it, it was a light blue metallic aircraft. I can remember the fire brigade washing the petrol down into the drain. I went up on the Sunday morning. I think it crash-landed the day before, on the Saturday and Sunday morning we went to see it.

Another thing which was very exciting for the children was that the Territorial Army that was based at Hollyhedge House on the heath used to march to camp with the band to Blackheath station, and all their equipment. They would load all their equipment and things onto the trucks on the railway there.

Three generations of paper sellers used to sell newspapers outside Blackheath station. There was the old man Eliot, who I remember before the war used to wear a bowler hat and used to have a big grey moustache. He used to sell papers there, though usually evening papers. And then his son took over after the war because the old man died I suppose during the war and then his son took over after that when his father retired so there were three Eliots, three generations selling newspapers across there. There also used to be the old horse hackney cabs. Bowler hats they used to wear then. Outside the station, down by the cobbled stones by the side of the station. I can remember an old man whose name was Becks, ‘cos it was the bowler hat days in those days and big moustaches. He used to be one of the hackney cab drivers, the horse drawn ones and then that was taken over after the war by the mechanised vehicles, which was run by the Hewens. There was Fred the son and his father’s name escapes me at the moment. Father and son, they had the monopoly of the black cab business.

There used to be a laundry in the village next to The Three Tons called the Reliance Laundry, run by George Barton and he used to supervise the running of the laundry and collect the washing in his van and deliver it in his van. Almost a one-man business. People who were employed obviously did the washing and laundry.

The Railway pub used to be called The Railway Tavern and the Cutmores had it for many years. Mrs Cutmore was the last remaining member of the family to run it. What happened after that I don’t know. She was quite old when she gave it up. Must have been in her seventies when she retired. And the Crown Hotel was run by the Macfarlans. The old man and then the son took over. And then Alec Macfarlan took it over.

In Blackheath Grove where the new shops are there used to be a Wesleyan Church and that was bombed completely, I think a doodle-bug or a rocket hit it. And behind that there was the Express Dairy milk depot.

Some time ago in the 1965 the Crown Pub had a fire and was closed down and at the back of the Crown there was an old coach house and they turned that coach house into a temporary pub while the main pub was being renovated. Two of the bar staff were killed in the fire. The barn used to be an old coach house many years ago.

There used to be a goods yard down by the railway lines that run towards Lewisham. There’s an estate of houses built further down there now. When we lived in Collins Street you could hear the trucks being shunted from one end of the yard right down to almost Lewisham where the bridge crosses the line further down. It was so loud it used to shake the houses! And Cables used to have their coal delivered just there into the yard.

The best train journey that I can remember was the return journey arriving at Blackheath after five years of being in Jersey. I felt excited and bewildered. Mrs Unstead, our next door neighbour worked on Blackheath station as a porter. She greeted me. She was the first person I saw. I hadn’t seen my parents for five years. We’d been completely isolated on Jersey. The Germans were there. So my neighbour greeted me and we walked through the village down into Collins Street and people were there greeting me.

When I was a child in hospital they raffled a huge cracker from the sweet shop and I think it was fixed that I won it! It had toys inside and various sweets and so on.

At the Pagoda Café we used to go and buy two pennyworth of stale cakes. You’d get a carrier bag of all the cakes at the end of the day that they wanted to get rid of. That was good. And I can remember, on boat race day they used to make different coloured cakes, a dark blue and a light blue.