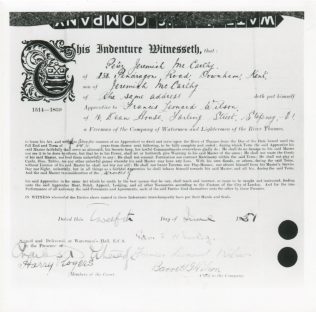 C: Alf Edward Williams. And that would have been the name on the

C: Bill Lindsey has already shown me his indentures, and so has

A: So you’ve seen them. Jack Maclean ?

C: Yes. Do you know the Jack, the lighterman..?

C: He’s now living at the Sam Manners House in Greenwich, and he

talks about lighterage some time with me. But one of the funny

things, on looking at the indentures; all the language is

A: I come of an era before them: My indentures are on parchment.

C: So theirs is not on parchment?

A: Theirs just paper, that’s all.

C: So it’s a scroll that unravelled?

A: Yes. My father’s half was cut from my half, so that they

matched together, to identify an apprentice. However the..

C: Did your father; was he the Master?

A: My father was my Master.

C: And he stood apart from you as he stood at the Court of the

C: And was it a ceremony that was taken very seriously then?

A: Oh, absolutely. Probably a lot of them first time there

C: Can you remember the form of it, the ceremony: What happened?

A: Well, the court sat in array, horseshoe fashion, with the

Master in the middle, and the wardens and all the officials;

licenced men, some would be from the union, like Gosling from the

union. And you would be bound to serve a term of five, six, or

seven years. If you was an apprentice at sixteen, you usually did

five years. If you was apprenticed earlier, you did seven years.

But, in my case, they didn’t want to be bother me because I’d

been four years in France, so I only did the five years

C: So your apprenticeship was broken up by active service in the

A: Oh within days. Within days of being an apprentice I joined

C: As an apprentice lighterman you could have joined the Royal

Navy: What made you decide on the army?

A: I don’t know. It was a popular thing to join the army.

C: Because I know that the Navy has always had first pick of the

A: You were free from tapping you on the shoulder and saying; “Come on.”

A: Pressing you. You were free from that. In any case, I was

under age. I joined as nineteen.

C: How old were you when you, in fact, first went off overseas?

C: I didn’t know people went off at sixteen. I thought it was

eighteen. Sixteen years old. You told them you were eighteen?

A: I told them I was nineteen.

C: Where did you see action, Alf?

A: First of all in France, then…

A: Yes. But then we went up to Serbia. They called us away from

France, and took us up to the Dardanelles, we had a look at

that. They didn’t land us, ’cause they was leaving the