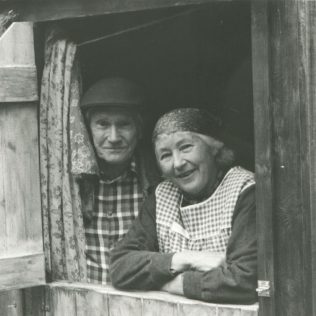 Mrs[L]: It started about the end of August and people would all be asking one another, “You got your letter yet?” Because they got their letter to say when they should start picking the hops usually about the end of August. “Have you got your letter? So and so’s got her letter. We haven’t got ours yet. It’s quite exciting.” And it wasn’t until the last week in August the first week in September or the second week in September, that we’d all go up to London Bridge from this area.

L: The beginning, that was the exciting part, they was worried about if the were going to get their letter. Well then about the end of August they would all start buying their pots and different things and store them and they had a cart, home made cart on wheels.

M: They used to make a box, big box with two handles with one in the middle. And it was made by the people that were going. And it used to have a lift up lid on it. They used to pack everything inside that and lock it down, put a lock on it. And it had four wheels on it. Like the little shopping trolley, but much bigger. up to London Bridge with that.

L: And they used to push that up to London Bridge Station.

D: People would walk from around that docks area?

D: So how did you get this big box on wheels on the train?

M: They had a guards van. Piled in the guards van. In them days everybody was helping everybody else, because we were all children with our mothers and fathers. There were six in my family, three girls and three boys, so we all helped out, like granny next door and granny next to her. You’d help a granny to put her box in.

L: They’d put them all on the train and they’d go Paddock Wood, and you’d be met there by the farmer’s wagon. He’d say, “You’re going to Wheelers Farm?” You’d all get in your cart.

W: People knew him, they went year after year. They knew it was like a family, they knew everybody from the year before, and they knew their wagon and they knew the driver and they would got to the wagon and get all their belongings on. And he would chop chop down to the farm.

M: Some of the wagons had three horses in front. Depending on where you was going, in the hills to get up had three; some wagons had two – in  a line.

D: Must have been heavily laden?

L: Oh yes! You see, each farm wagon would go with his hop pickers to his own farm and then he’d take – from Paddock Wood to where we would – sometimes the men would walk. The women and the children and the boxes would be put on the wagon, or if not the man or the husband would wheel the trolley to the farm.

D: So he’d be left pushing the trolley and the others would get a ride?

L: the hopping box they called it. And he’d take that to the farm and the children and granny and aunts and uncles all go on the wagon.

D: Did anyone have to get off and push to help the horses up the hill?

L: Not really. It wasn’t all that hilly, where we went hop picking.

M: They were strong shire horses to pull. Them wagons had bid wheels. Sometimes you go down in Kent now and you see the wagons, big heavy drawn things. Hay wains.

L: And then he’d go to the farm and you’d know which hut you’d go to because you were there the following year.

D: Did anyone ever go down on spec that hadn’t got their letter?

L: Most it was people that had been the year before. If you wanted to go for the first time you’d write to the farmer beforehand. And then you’d wait until he’d replied, if there was a vacant, how many pickers he needed, and if he wanted more, you’d get a reply, or someone had died since the last time, they would go get a letter and they would be a new picker, and they would go and they’d have the huts that were left off. So you knew which hut you were going to because you’d been there the year before.

D: If you wasn’t needed you wouldn’t get a letter?

L: You wouldn’t get a letter. If you didn’t get no letter, there was no point in going. So you waited for your letter so you’d know that your place was booked. It was like a booking really. And when you arrived the farmer would come round with big bails of hay, straw.

M: And you would take down what you would call a duvet now. Open at one end. We used to have the same thing, like one of those big pillow cases, but it was sown up the top and sown down the side before we went.

L: It was like a mattress. And you’d fill that up with straw.

M: And you only had the one bed.