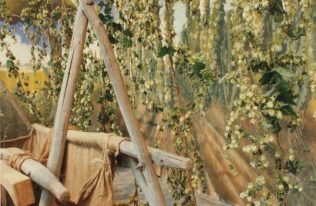 P: So, as a child you’d be going to the local school?

P: Did the school start later in the year for the local kids because of the hopping period?

B: It’s the same now, the holidays were more or less timed with when the hops are grown.

D: We never used to break up until the end of August then.

P: And then you’d do the hopping in the school holidays?

P: You didn’t miss any school?

P: Did you go onto the hop fields yourself?

B: Yes, kids like us were sent up the front of the row and used to pick them in the upturned umbrella.

P: What’s your memory of being a child and meeting London kids coming down?

B: Funny enough we didn’t meet a lot of the kids.

P: They were kept separate, were they?

D: The kids had to work during the day.

B: The kids had to work during the day. That’s all they came down there for, to get their clothes for the next school term.

P: But a lot of them seem to have been knocking around in the afternoons and not working, so I wondered?

B: I don’t know, the locals never seemed to meet them.

P: So, did you look forward to the hoppers coming down?

B: It was just one of the year’s routines. It was one of the seasons you went through. And at that time also there was large bushes of blackberries, and all of the local kids went picking those. Just down the road here at New Farm, there must have been forty or fifty acres of blackberries there.

B: Yes. For Smedleys which is near Maidstone. So, there was a lot of the, it wasn’t just hop-picking. And then you got the main crop of apples at the same time. My mother very seldom went hop picking; she always went apple picking, blackberries, plums, hardly see plums now, there were acres and acres of plums in those days. Even cob nuts.

P: What would you pick the cob nuts for?

B: Yourself. Most of them fell on the ground.

P: And what were they used in?

D: They were edible.

D: You know, the cob nuts you buy at Christmas. Kentish cobs they were.