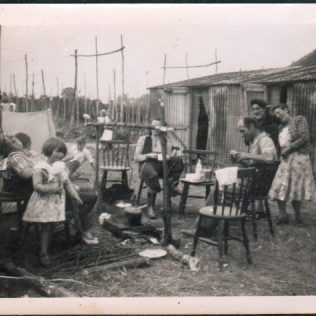 D: Do you think that the prejudice against East Enders came because of the evacuees?

D: What about this photo, this is an older one?

E: That’s a very much older one, and that’s my grandmother again. That’s my mother looking dreadful. Aunt. My grandmother’s eldest – she must have had it about 14. And my other uncle’s wife, my uncle, my aunt Edie – and I don’t know that lady.

E: It probably is.

E: Is it. I think they did used to do that with photos. And that’s probably when I was very young down in the hop fields.

D: Is this the old wellies?

E: Yes. We used to go in a big pram and push everything.

E: Yes. That used to go as well. Now that’s much later. Because I must be about 12. That’s my mother. That little girl was a backward little girl who used to live in the huts next door. And that’s her sister, and her brother, and her dad. And her brother and my cousin. Across these huts – they were brick built up to there, they were quite good huts, but we was all had to talk to each other across the top because you could actually stand on the table and look over and see them all in bed. So, privacy wasn’t even in it.

E: When the parents were out, I think the kids used to lark about and throw things over and talk. And that’s a much later one, that’s just on the field. That’s the huts there. We used to get faggots delivered every day to burn. Each day the tractors used to come and deliver six faggots per family or maybe three.

D: That was from the farmer?

E: Yes. And you’d burn those to cook your food.

D: Is that the old pot that’s still boiling there?

D: Look at the shoes, the lads – they’re not quite wincklepickers?

D: Is this what used to come out at night then?

E: Yes. And round the pub. Weekend that looks like, everybody’s dressed up. All singing. D: Look very smart; did people do that at the weekend?

E: Oh, at weekend, yes; everybody had a strip wash in their hut with a bit of hot water if they’re lucky, and everybody would come out really looking nice. But on the pubs, the pub doors, it always said – people did congregate – “No hop pickers or gypsies in this bar.” So, you always had to go round.

D: Didn’t that upset people?
E: No. I don’t think it ever did. It was accepted.

E: Yes. Although some local people used to like to mix with the hop pickers because it was a bit more fun; there’d be lots of singing and dancing. During the year I don’t suppose there was about ten people in the pub. All of a sudden during the hop picking season, the man must have made a fortune. Especially at weekends with all these men coming down from London and just singing and dancing and goodness knows what in the pub.

D: What sort of hours did they do; or did the pub open late?

E: No. Proper hours because there’d always be the local bobby, then you’d all have to see your way home with the torch. Because the lanes were so dark – I can’t imagine anything being as dark as it used to be. So, you’d have to have a torch and you’d go along and find out where you had to be.

D: Did anyone get lost in the dark?

E: A few people fell over I should think, especially if they were drunk!