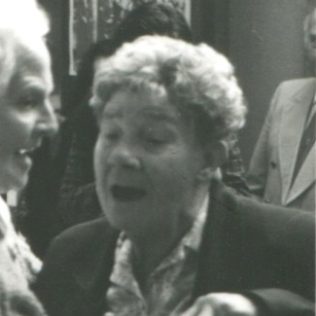 P: How old were you when you first went hop picking?

P: So you went as a young married women did you?

E: Yes, but I was old actually, they’d all been going years before me. Married into a hop picking family.

P: What was your first impression of it as a trip; did you travel with a lot of people?

E: It was funny really. You all got your stuff together gradually through the year, bits and pieces, and you’d march up to London Bridge about three o’clock in the morning. And then you’d get on a train – you used to wait there for hours and hours before the train went, and it used to take you down to the place where you go and pick the hops, there was a main station, such as Marden, Paddock Wood and all those sort of places and then you’d wait there and then you’d get a cart come up and the farmer send his cart down to the station to pick you up, take you back to the farm. And then when I saw the huts, I nearly dropped. First reminiscence I got of it was, when you got to the huts you had loads of straw and you had to make a bed up, so if you didn’t take a mattress cover with you, you were stuck. Me mother-in-law told me to take a mattress cover; she saw me alright.

P: You were saying you got all your bits and pieces together over the year, what sort of bits?

E: Wellingtons, and clothes for the kids so they can go about “anyhow sort of thing, because it’s no good putting good clothes ^on them, because while your picking hops, you took more than what you needed, like you do any other time. You made the beds up. Lit the fires up first, outside. The men usually done that. My husband used to do ours, for his mother and me. The first day you’d get yourselves all comfortable, as comfortable as you can, and you sort of adjusted it as you went along.

P: Did you have to gather your own wood?

E: The farmer used to deliver what they called faggots at the

time. Tree twigs and branches, about a yard long, all done up in a big bundle. And they used to give you so many bundles for a hut.

P:     So the farmer would also be preparing for the hop pickers?

P: So when you went you were going to stay with people who knew the ropes and who knew what to do. When you were shown your hut, how many people were you going to have to share that hut with?

E: There was my husband, me and the baby – he was ten months old. That was the eldest one. He was ten months old, we used to go and send t the kids to the farmhouse. So I sent my brothers to the farmhouse to get me a hot loaf, lump of cheese or corned beef – it was cheap then, you know – and course they’d bring it back and butter in it, and we used to cut it up, ready for 12 o’clock, when they blew the whistle for lunch. And silly me, I being so green on it, I put it at the back of the push chair. Course, when they blew the whistle for lunch, we’ve got no food.

P: Why? What had happened?

E: Ten months old. I’m not kidding, believe me, I’m not kidding. He’d eaten it. A whole loaf. Weren’t he good? Sitting in the push chair all morning. He finished up, he’d eaten the loaf, the corn beef, everything.

P: Would you buy the corn beef in a slab then?

E: Slices, in the farm, just like you do in a shop. The cheese was in a lump, you know. Anyway, the next morning, my mother-in- law says to me, “Give me that bag here.” She says, “He’s not eating that today.” So she took me food with them. Course, he’s looking round all the morning for food. It was funny. While he -was doing that, I was picking hops.

E: In the pushchair, side of us, you know. Course we never had chance to look at him, he was behaving himself so much, we didn’t bother. Course when we looked round, we got nothing for dinner.

P: How did you manage that day; did your mother-in-law help you out?

E: We sent the kids back to the farmhouse to get some more food.

P: Did you and your husband work as part of a team hop picking, or were you more part of a bigger team?

E: We was on our own. He was a pole puller. What they call a pole puller. And he was at beck and call of these people to help them. He used to have to make sure all the heads was off of the tops of the binds, hop binds, make sure people was [comfortable? countable?] and make sure their beans was moved – as a foreman would do, to see everything’s right.

E:     Nothing for that job. The bins were supplied by the farmer.

E: Like a bath. You could sit on the side of it, like that. But it was wood. And canvas bottom. Anyway, that went of alright, and then during the afternoons we had a mission used to” come down, because the people we went with all come from Shoreditch and Hoxton. And they was all like one big family, Russels, the Kellys and all the rest of them, all used to go into that one spot. And the mission – a Father Raven from St Columbias mission in Kingdom Road, Hoxton. He used to come down with tea and cake. Used to take a jug, and we have a jug of tea and a big piece of fruit cake for tuppence. He come round every afternoon with that. You’d give him that couple of coppers as voluntary help to replace, get more in I suppose.

P: Did they stay down there or did they travel from London?

E: They stayed down there. I don’t know if they went to different farms. There was too many on this farm I think, to go anywhere else. And they used to hold the children’s Sunday school, and what have you. It was Church of England.