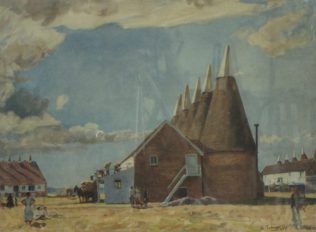 P: Could you explain to me why you got married when you did, just before the war.

F: My husband’s birthday was the 1st. We got married on the 2nd. The war was declared on the 3rd. Why we got married quick: We had our Bans in St. Mary’s Church to get married at the end of September, but my husband, being a Reservist, he was one of the first to get called up, and he was expecting his calling up papers. So, my mum went hop picking every year, that was our annual holiday, the lorry was outside to take her. We used to have a lorry to take all our things – everything barring the kitchen sink. Well they’d gone off. I was scrubbing my mum’s passage and my husband to be came down and said, “Come on, we’re getting married.” I was flabbergasted. I said, “Why?” He said, “Well I’m expecting me papers.” So, I said, “Well, we got our bans in the church, how can we do it?” So, he said, “Well I’ll go down to the vicar and ask his opinion.” He said, “Well, I can’t give you my opinion. I’ve got to phone through to the Archbishop of Canterbury to get a special licence and having the Sanctuary Westminster left open for you.” He did that, we came back, and we had a greengrocer’s business. My brother shut the shop. Him and his wife got the car out and took us to Westminster. We never knew where it was. We just parked the car in a cul-de-sac, got out and asked somebody the way, and they said, “You’ve parked just in front of the door.” When he opened the door there was a doorman stacking all sandbags up, and he said, “Are you the couple from St Marys?” We said, “Yes.” He said, “Well don’t wait your turn, because you won’t get back to the church in time.” Because if you got back a certain time, they weren’t allowed to marry you. So, he said, “When the next couple come down from upstairs, you go straight up.” And when he opened the door, we had a shock, they were lined up the stairs couples to get special licence because of the crisis. So anyway, we got this special licence, and we got back to the church just in time. We went straight up, because we had to get back to the church in time. The other couples said nothing. So, we got back to the church and there was not a soul in the church, we never had a buttonhole, nothing; just the four of us. My brother gave me away, and my sister-in-law was best man; and I think I must have been the first woman that had a woman for a best man. Yes, because it’s been known since, but not then. And it’s on my marriage certificate. That was because everybody had already gone to the hop fields.

P: Why could they not wait to go; was it because they were taking other people?

F: They didn’t know I was getting married. They’d gone before my husband came down. See, and I was clearing up after they’d gone, then he came down.

P: What happened then?

F: We came back. We had kippers for tea, at my sister’s. That was our wedding breakfast. We never had a bouquet, a buttonhole, or anything. And as I got up from the altar I looked, and I had a ladder right at the back of my stockings. That is my husband’s photo.

P: Before you were married; what year was that; in the ’30’s? F: Must be. I’ll get my wedding certificate out and show you. P: Oh yes. Marriage certificate, 1939, 2nd of September.

F: That was my sister-in-law, and that was my brother.

F: That’s just round the corner. But they pulled the old one down and there’s a small one there now.

P: And he was an Arsenal examiner. What does that mean.

F: He worked in the Arsenal. On the research. He was home, working before he was recalled.

P: So, you had a best woman. What happened after you had your kippers for tea.

F: On the Sunday.

P: Did you have a home to move into?

F: Yes, we had a flat, getting a ready flat at the end of September. And on the Sunday, the day after, my brother decided to take a lorry load of fruit and vegetables down to the hop fields to sell. We went with him; the first day of our honeymoon. So, going along, all of a sudden, the sirens went. War was declared. Please take cover. So instead of getting off and taking cover, my brother got off and covered all the fruit and vegetables over.

P: More worried about those than you?

F: Yes. So anyway, we ended up at the hop fields. But since we were children, we went to the hop fields every year, with my mum and dad, because that was our only holiday.

P: Just to go back to this particular day, what was your mother’s reaction when you got down to the hop fields and you said you’d got married?

F: Well she knew we were getting married at the end of September. We explained it to her, and it was quite alright.

P: Was she sad that she hadn’t had an opportunity to be there?

F: No. Because she loved her hop picking. She wouldn’t miss that. Anyway, this is the photo. It’s a very old one mind you.