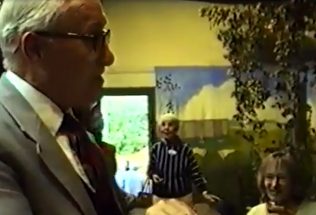 I: In that book there’s a story that people carried on hop picking in Kent, and a plane coming over?

H: A saying that they used to say down there was, when they heard the planes coming over, one or two people who had a sense of humour, said, “Don’t look up, it’s one of ours.” I do remember once, a young girl got pulled up by a farmer of an orchard, and we pleaded with him, not charge her. I think he did it to frighten her. It was at one of the fruit farms we had to walk through as a right of way to go to Ulcombe. And we were going through his orchard – it was a right of way; we were entitled to. I suppose he was watching. She pinched an apple. And in the end, we gave him 5 shillings. But on reflection I think he did act to frighten not only her but us as well.

I: So, word would get round.

I: Did anyone have any bad accidents while they were hopping? H: Not that I know of. Just the normal little grazes, cuts and bruises and that sort of thing. I can’t think of anything that was untoward about it. Never knew of anybody have a fight or anything. The only thing I do know, I remember, the huts were built like that and they had a section right through it, so you had people in that side and people in that side. Somebody had gone bashed into the back of the hut, and of course they all had their cups and saucers and plates along the ledge there. Down came the bloody lot. Came round, “Who done that!” There was a row about that. And the woman had to, “Next time I go down, I’ll buy you some cups and saucers.” Probably all cracked anyway.

I: Did people take much stuff down with them?

H: You’d be surprised. In the end it became, they took beds down there, and everything else. Well they used to take down on lorries and then put them up, and the farmer gave them logs. And they started putting wallpaper on the walls. And they made them quite homely. A chest of drawers, maybe a table, small dressing table. Course you had to walk in and out them. We went down there last year and saw the people down there who used to go, and there was one woman of 92 who was in the hut there, and my son knew of her relatives, and spoke to her, and she still goes down there every year and has her holiday down there.

I: Did you say the huts were made of tin? H: Some of them. Others were stone.
I: Did the tin ones get very hot?

H: Yes. Of course, the toilets, you know what the toilets were, don’t you? Just a box like a watchman’s hut, and you went in there, shut the door and there was a board across, and just sat on the board with a big hole, and disinfectant.

I: How many people would be using that?

H: All day long: Line up more or less.

I: Bet it smelled after a bit.

H: Yes. They used to come and put stuff down it afterwards. Then they’d go and dig a hole farther away, shift it over there. Probably put a fruit tree in there afterwards.

I: Just one hut for all?

H: They’d have one or two huts, maybe three.

I: What about water?

H: They had a running stream. They had a stream there, and its beautiful clear water.

I: Was it dirty work?

H: I suppose it was. Sometimes you got your tea full of smoke when the wind was blowing so hard it’d blow it inside, tea and water and soups and stews. But they used to have great big drums. And they’d make enough for about 10 or 12 people. They’d make tea in the teapot and put it on the fire; no, they’d make a great stew in these great big open pots. The family would share that, there’d be maybe ten in a family. I mean my mother-in-law had 13. Brought up ten of them – three of them died.

I: In front of every hut there’s a little fire going?

H: No, they had a long shed, they had the fires built in there, and the iron bars across, you hung your pots on there for your water, or stew.

I: So, it was all enclosed.

H: Yes. When the wind blew through the way, you would get the smoke all through the place, and hardly breathe; you had to stand outside. It was an experience. I enjoyed it. I was about thirteen when I went down.