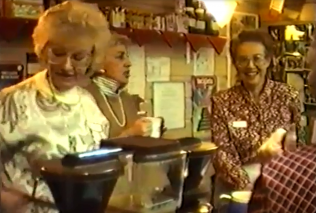 P: Did she always get the letter from the same farm?

J: Yes. Always she picked for Whitbread, until the year she died. And then my mother took her ticket over; she used to go and take my sister and her two boys. You used to have to wait for your letter to arrive before you could go, because you always had the same hut. On Whitbread farm you had – ooh it was quite flash really for those days – you had a two-story hut. They were built in blocks of six, two at the side, two at the front, two at the other side. They were brick built at the bottom. But the upstairs – ’cause you had two rooms – the upstairs was built of tin, and you had a tin roof with a skylight. Which was lovely when you could see the sun, and the stars and things. But people used to paint them to keep out the light. But when it used to rain it used to bang on the tin roof!

P: So, you remember as a child sleeping in the upstairs and looking out at the stars?

J: Looking out through the skylight at the sun.

P: Could you open the skylight?

J: That I don’t remember.

P: Was that unusual to have a two-story hut?

P: That was a bit posh was it?

J: Yes. Whitbread’s was always a model farm. They’re still there the huts, to the best of my knowledge. There used to be across from us was a row of one story single wooden ones. My gran was always afraid of fire, she would never have had one of those. Most hop farms they had the same thing. They were just – one story you had one room, you ate, you slept in. You did cooking; most farms you cooked outside on open fires, Whitbread’s used to provide us with cookhouses. Brick built tin roofed, but three, back to back, three fireplaces in each. Each side was about as long as this, about two thirds, and there were three chimneys, for three fireplaces, so three huts this side, a fireplace each. And they used to provide you with bundles of wood where they cleared the, when they used to trim all the hedges and things, they were like twigs. They used to call them faggots; they were all tied up or wired up; usually tied up with string, and they used to provide them for you to burn.

P: But most people burnt them outside, didn’t they?

P: But in your huts you could actually make a fire indoors?

J: No. Outside. It was a separate building. Between each there would be a block of six huts. And then so many feet away there would be a cook house, of three this side and three the other side for the three huts.

P: And did your family use those?

J: We used them, and you had a rod across, and you used to put

pipes on. But then my mother acquired – I don’t remember from where – a double burner oil stove, with an oven on top. I don’t remember, we never had a roast dinner; I don’t know how they used to manage it, but we always had a roast dinner Sunday. I only remember the weather being good. Sundays was wonderful. We used to have a big trestle table. Father used to come for the day – because he hated it. He didn’t like it. He only allowed us to go because I’d been very ill, and my mother had almost had a breakdown, because they’d lost a child. And she never recovered. I was a frail child, and I’d been very ill. And I don’t ever remember going before then. So, I think, afterwards, it was because I’d been ill, and my mother had been ill. She never talked about it, she never made any fuss about it, she never ever spoke about my brother; so, I think that’s probably why she didn’t. He was 15 months old when he died. He’d had pneumonia three times, and he had pneumonia and measles. But, tracing back from my daughter and my grandchildren, we were lactose intolerant, something they didn’t know about then. I was lactose intolerant.

P: That meant you had to be bottle fed?

J: Milk is what makes it worse. I’m not as severe as my granddaughter, who’s not allowed milk of any shape, size or form.

P: So that must have made it much more difficult to keep a healthy child in those days?

J: Yes. But they didn’t know about lactose intolerance whatsoever. I was a very frail. Because it affects your immune system you see. We started to trace back when my granddaughter was dying, after she was born. And we traced it back to when I was ill and my brother died and my sister was ill, and they said that in all probability we were lactose intolerant.

P: So, as a six or seven-year-old when you went out there, you were still quite a frail little thing?

J: Yes. I think that’s why we went. Because I was six the year, I was very ill in Guy’s hospital. And I was seven the first time I remember going.

P: Did they want to build you up?

J: I think so because we had freedom. I didn’t pick hops, only if I wanted to; we didn’t have you do anything! We roamed the fields; we went scrumping – very naughty – blackberry picking. We just roamed.

J: My gran was a widow. They were my young aunts and uncles, but we grew up together. They had to pick. Because she didn’t have any money coming in. I don’t know if she had a widow’s pension even. She may have done.

P: So, the kids were actually needed?

J: Most people picked. It was a holiday, but it was a working holiday. They needed the money the children picked. My sister and I we were very lucky. We didn’t have to. My mum only picked because she wanted to go and take us away, you see, it was good for us.