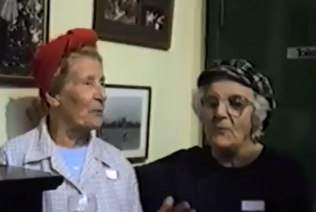 P: Who lives at flat 3, Maybrook Court, 43 St. Gabriel’s Close, Plumstead… So, yes, what do you remember about the first time you went hop picking?

K: When we got our letter from the farmer, saying that the hops are ready to be picked. Then we were off, my mum would go to the second-hand stall, and get all the second-hand clothes for us to wear, and we’d take the pots and the pans and all our clothes and bedding…lino, wallpaper, bag of flour to put the paper up when we got there.

P: Say a bit more about what you mean about bags of flour.

K: Well, um, the actual huts were all white… and it used to be horrible, if you didn’t. So, my mum use to buy all these odd rolls of wallpaper. Didn’t matter what pattern or whatever, and a bag of flour, any flour and we’d mix it up like a dough and put that on the wallpaper and it use to stick on the walls and hide the distemper, and plus it looked much better.

P: And you took the linos off the floors at home?

P: To put on the floors of the huts.

K: Yes, that’s it, and then we used to take it back home with us.

K: Because we used to have so many old clothes, especially if it was raining, you had to keep changing yourself and things like that.

P: So, you need extras really?

K: Plus, we were already very poor so it didn’t matter that they were second hand.

P: So, you took the pram down, and used that to carry the things or the baby?

K: No that was to carry our luggage.

P: How did you actually travel then?

K: We used to catch the 3 o’clock train from London Bridge.

P: 3 o’clock in the afternoon?

K: In the morning. They used to call it the hop pickers train. And there would be several ‘cause like from all areas Stepney, Bermondsey, you know; nearly everybody went. There weren’t many people who didn’t go hop picking, where I lived.

P: And which station did you go from?

P: How did you get there?

P: With all the gear?

K: Yes, yes, ‘cause we had no money, well you couldn’t get on the trains in any case. And, um, ‘cause we knew what farm we were going to cause my mum went to the same farm for twenty years.

P: How did she know she was going to be working there? Did the farmer write or…?

P: Saying how many people you could bring?

K: That’s it. And if you were a good family, and you picked well, you worked well, he would have you each year. Plus, if there were any fellas out of work on the labour, they used to say to my mum, “Can we come hop picking with you?” my mum used to say, “Yes you can, but you’ve got to work”. If you don’t work you don’t eat. Cause she used to end up with two or three chaps that were unemployed.

P: So, would you all travel down in the same compartment then?

P: And how many would there be in the group?

P: How big was that?

K: Well, um, when we were going, we were all ages, ‘cause you know some were getting married and they still went hop picking though. I think about 30 of us. Well, 1,2,3… we used to have about 5 huts.

P: And you always went to the same farm?

P: Where was that?

P: So, did the train go all the way to Wateringbury?

K: Yes. And then we used to have about a 2 mile walk from Wateringbury up a big hill to the farm.

P: How old were you when you first went?

K: When I first went hop picking, well, I was born in January, so I should imagine I went there when I was about 6 months old.

K: Yeah, and one of my brothers was practically born down there.

P: So, what would happen to you as a little baby then, while the parents were picking?

K: Well we’d go up the field with me mum in a pram, so the pram use to take all your luggage in. And then used to keep the babies in, in the huts. Instead of put them in the straw. But that was the early part, when I went the latter part, when I got married, I use to take my own bed and you know, and wardrobe and things like that. It was a little bit posher. Some use to take pianos.

K: Yes, we did. And calor gas cookers. At the latter end of hop picking.

P: They must have taken that on a lorry or something?

P: Right, let’s go back to the early part then. And then we’ll come up to date. Now, in the early part, as a little girl say, if you were going picking, what would your day consist of?

K: Well it would consist of getting up at 6 o’clock in morning; lighting the fire, getting the water.

K: From a tap, quite close to the hops. And then the faggot man use to come round with the faggots. So, you used to light the fire, get the pot boiling and then you’d have your breakfast.

P: Did the kids help with that?

K: All the children helped. You’d have to help, otherwise when the lolly man came around, you didn’t get a lolly.