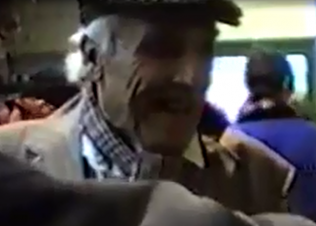 D: What are your names?

D: And you went hop picking as well Anne?

D: How long did you go hop picking for, Mike?

D: Did your mum take you?

M: First of all, went to Headcorn. For about four or five years. Then my mother wanted to go to Tonbridge where her people were, father, brother, sisters, so we decided to go to Tonbridge. And we got this farm at Tonbridge, and slept anywhere; rough stables, in barns. And we went in that barn. Puddles of water outside. Anyway, we carried on there. This farmer had two farms, Bank Farm and Lilly Farm. If you worked on Bank Farm, you had to walk down to Lilly Farm where the hops were, after you picked the hops walk back to Bank Farm. So, we decided to go to Lilly Farm, to get near the hops. Get to Lilly farm and all the sisters and family are on the farm. We all lived there, enjoyed ourselves; grew up as kids, right up until recent years, last picked hops there. Very friendly with the farmer, Bridges, weren’t we?

D: So, you stayed on the same farm all the time?

M: Yes. All one family we were. Had thirty bins; we were all one family. We carried on. As a young man, about 18, I put up a hut for myself, used to be about five or six, it was only a little old shack place.

D: Before that you didn’t have a hut?

M: No, I used to live in with mum; about ten of us in there. And when I was 18, got a pole puller. I got this little old wooden hut thing, and that’s where I’d sleep. Then I got married and wife came in there. And weekends we’d have one or two get in there to have a kip. Then on I got a car, used to drive them all about in the car, first car we ever had was my car. And used to go farm to farm and station to station, charge them 6d each.

D: Was that when they came down at the start of the hop season?

M: Yes. From there to Tonbridge used to charge them 6d and bring them back when they’d get their shopping in Tonbridge. But apart from that they had a little shop near a pub called the Carpenter’s Arms, and this little shop called Pimbers, they sold oil, paraffin, bootlaces, bread, margarine, post office; one of those little shops, you know. And we done alright there. Kids used to love to get the shopping. they’d take all day; you know what they’re like.

D: Just used to skive off.

A: There were a load of kids in the family. We’d all go.

A: Dad, tell about when you was little. He’s all got connections in Kent, my cousins they bought a bit of land during the war, his son built a bungalow on it. So, we’ve still got really strong connections.

M: My brother, my eldest brother.

A: But when he took you to hopping when you was little to be his skivvy.

M: My brother and his friend, hopping the two blokes. They took me with them and picked the hops up as they thought. Had my hair cut first thing, took the lot right off. Bald headed I was. And they got an old dog with them called Spot, took him and all. Pushed us through the ticket barriers; no tickets them day, you pushed it through. They don’t want to leave him behind. We get on the train. Not the corridor trains, just the one department trains. We was sitting there all sides. Ticket bloke comes along for the tickets. They shoved me under the seat with the dog, and those two sitting there. the dog is quiet enough. He’s heard the ticket bloke come along, “Tickets! Tickets!” He goes, “Grrrr.” Course that was right against my head, I had my head to him. When they got me out I cried my eyes out.

A: He was only about ten.

D: Because the two lads were working, you had to do…?

A: They took him to do the skivvying. Look after their hut.

M: Anyway, my eldest brother, he bought this small holding down at Five Oak Green, near Paddock Wood. And they built huts, had old wooden hut they put on there. And it stood like that for years and years, they used to go down week after week, month after month, they loved it, he and his wife. Anyway, he died last year, August before, and his son took over. So, he decided to chuck all the old stuff and build a bungalow. So, he took all the old hut down and knocked it all down. And he built a lovely bungalow.

D: When was the last time you went hop picking?

M: Hop picking itself? When the farm shut. 30 years it closed. The lady lives on the farm, she lives in one of the oast houses, made it into a house. She loved hopping. She said she’d love to get a hopping reunion up.