What Did You Do In The War, Mum? Using The Reminiscence Theatre Archive In The EFL Classroom

zoom
Website created by the EOI Malaga students based on Pam Schweitzer's work.

zoom
Forum on the "What Did You Do In The War, Mum?" Website: The Secret Service 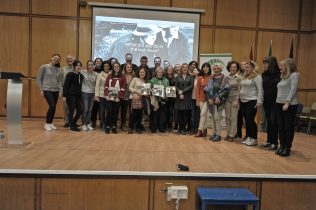 I had the privilege of working for Pam Schweitzer for nine months in 2014. I got a sabbatical from my job as an English teacher in Spain and became the last of a series of assistants sent by the EC to digitise the Reminiscence Theatre Archive. I must say this experience was a watershed in my personal and professional life.

The first project I worked on was devoted to the role of British women during the Second World War, and I must admit the work took me more than I expected because I couldn’t help being trapped by their incredible stories.

When Pam donated her archive to the University of Greenwich, her goal was to make it available both to History and Drama students. But from the very first moment I realised this was also pure gold for my classes at the Official School of Languages (EOI). Hardly ever do we have access to this type of knowledge in our regular textbooks and knowing the people is how you really learn to love the language.

For each theatre project, Age Exchange published a book that contained all the testimonies that had been used. I wanted my B2 English students at the Official School of Languages in Malaga (Spain) to read the one about the first project I worked on, the one about the women during the Second World War.

But they wouldn’t be able to understand these testimonies unless they did some background research. And this is how I came up with the idea of building up a website divided into each of the different ways British women contributed to the war effort (the farms, the factories, even show business).

For each topic, groups of three or four students did their research on the internet, selecting information, photos and videos. They had to write their own texts, which I revised, and quote their own sources. We used Google Sites, which allows different editors to work at the same time and I marvelled at seeing how the different sections developed, each with its own personality.

The next step was for each student to read all the other sections and make comments on a forum at the end of each one, making reference to the stories in Pam’s book or any other material they had found. And here, reading all the comments the students had made, was when I realised there was real passion in their work.

I would like to leave you with just a couple of them:

“I’d never thought that a book could stir my mind in this way. I would like to thank Pam on my behalf and of all my classmates’ for this gorgeous work. It’s much more than a book. It’s the window that allows us to see the hidden side of the war, outside the battlefields. Reading this book all of us have been running off to the shelter, stretching out our rations, overworking until exhaustion but doing our patriotic duty, separated from our children. But we have also been dancing,  waltzing, fox-trotting and singing. This is the real war.“ (Elena R.)

“Reading the book has made me think about women as human beings. If we go through history, women have usually been considered vulnerable people who cannot do important things. This is not true.  Women have been part of truly remarkable events, but these haven’t been published due to obscure interests. I believe Pam is a brave woman. Her book has revealed to us the true nature of women, who are capable of performing any action even when it is very difficult and unpleasant. In addition, the book has allowed me to find out about the role played by women in World War II, which many of us didn’t know about.” (Angeles R)

Finally, in March 2019 Pam came to the Official School of Languages in Malaga (EOI Málaga) to meet our students and tell them more about the British women’s role in World War II. She also gave a presentation on the same topic for PhD English students at the University of Malaga, invited by Professor Rosario Arias, Head of the English, French and German Department of the Faculty of Arts. Finally, I shared this project with EFL teachers from all over Spain at the XI Congreso Estatal Escuelas Oficiales de Idiomas.

Working with the Archive material and making the website has motivated my students enormously, they feel much more confident and ready to face new challenges. It has definitively awakened their curiosity for British History and Culture. This project has really made a difference. Thank you, Pam.