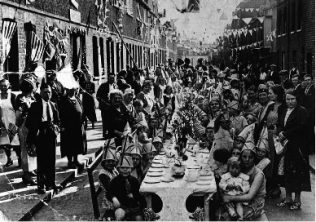 Everbody seems to remember what they were doing on V.E. Day and mostly people have memories of celebratory events connected with the end of the war. For those who were mourning lost sons, husbands and fathers, however, these celebrations threw their own grief into sharp reality.

The period immediately after the war is mainly remembered as a time of adaption, and not always a very smooth one, to domestic situations. Husbands returned after several hard years away, women gave up work and returned to domestic roles, and evacuees came back from the countryside to the rubble of London. The lack of suitable housing, the continuation of rationing, the constant queuing for goods outside shops still battling with short supplies, and the cold winters of the post-war years, compounded by the fuel shortage, make this a rather grim period for many to recall.

However, it was also a time of hope for a better future with suitable recognition for the sacrifices people had made in the war years. The rationing was irksome, but it had demonstrated that there could be fairer distribution of available resources. The collision of cultures as a result of evacuation and of conscription which brought groups and individuals together across normal social boundaries, had served to heighten people’s consciousness of the need for better social provision, health care and educational opportunity. The 1945 General Election brought Labour to power with a massive mandate to bring about a fairer Britain even out of the near-bankruptcy caused by the six year war effort.

these stories have been given to us in taped interviews or in written contributions from a wide range of people in south east London. To all the people who have agreed to contribute their memories, we are extremely grateful. For those of us involved in collecting, transcribing and editing these memories, it has been a fascinating opportunity to learn more of a period which is relatively undocumented and little discussed compared with the high dramas of the war years themselves.

Dramatising the memories for our touring theatre production has been a tremendous challenge. We had to begin with the climax, the great celebrations of peace on and after V.E. Day, and then evoke the long hard slog to recovery and stability as experienced by ‘ordinary Londoners’. We hope these pages will prove as rewarding to the reader as they have for us.