You are here: HomenextMethodsnextSteps 6-10: From Production to Performance

Steps 6-10: From Production to Performance

Designers, musical directors, tour organisers, performers, all need to join the creative team at the earliest possible date. Thinking about the audience’s reaction to visual and musical prompts and how to provide a multi-sensory stimulation through the performance is particularly important if the target audience is older people who may well have hearing difficulties or limited vision. 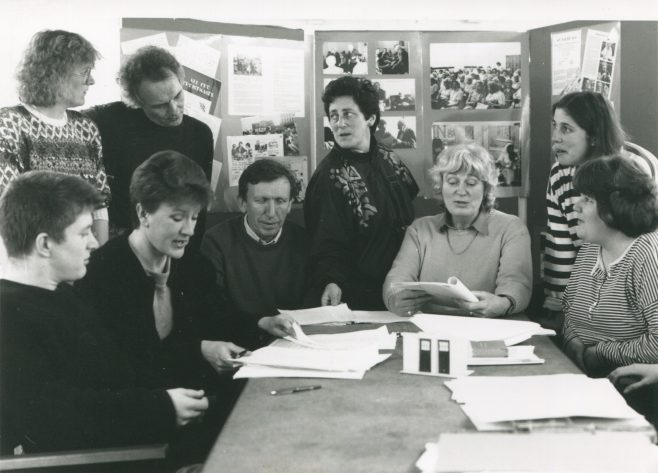 Having a musician on board who can underscore certain speeches in the play to point up an emotion can make a show more accessible, and the insertion of an appropriate song at a particular moment can provide audience members with a chance to reconnect in a different way with the material of the play. 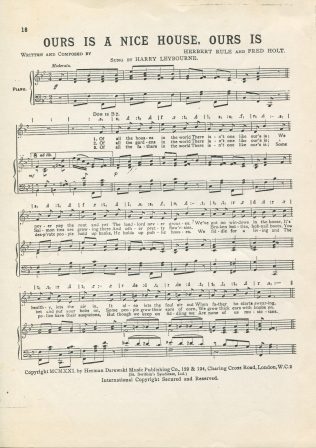 Choosing performers with musical skills is vital for reminiscence theatre. There is a great impact in having live instrumentalists and singers on stage who move in and out of dramatic performance, and this contact with live music making is an all-too-rare experience for the older audiences who are much more likely to enjoy the shows. The style of performance, in keeping with the period remembered, is a powerful memory aid and emotional trigger.

The designer will need to plan for performances in very different sized and structured venues, so sets have to be easy to adapt and light to move, and props have to be sparingly but carefully chosen so that they are easily recognised and have strong reminiscence connotations.

Reminiscence theatre shows often tour non-theatre venues, so the tour organiser plays a vital role at an early stage. He or she needs to ensure that the audience at each venue is prepared and has some idea of what to expect. Without this, the performers can be disappointed when a very small audience turns up to see them and an atmosphere of excitement and occasion is then hard to generate.

Wherever possible, older people should be invited to attend rehearsals and even to direct the actors in scenes based on their experience to ensure maximum involvement and authenticity. Although some actors find this a little invasive of what is normally a private preparation period, most feel that a chance to meet and work with the ‘sources’ makes the experience worthwhile and gives them additional confidence. 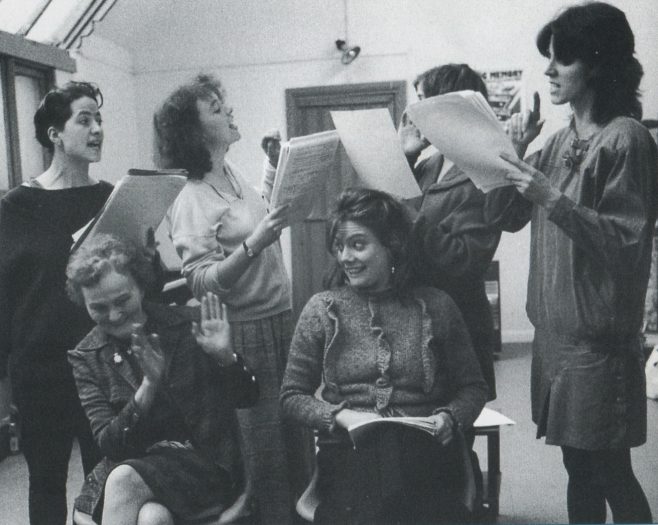 Iris Gange, an important contributor, attends rehearsal for ‘What Did You Do in the War, Mum?’ (1985)

There are countless examples of this being an effective addition to an otherwise ‘normal’ rehearsal process. Here is a brief example from a local newspaper describing a rehearsal from “On The River”, a show about London dock and river workers: 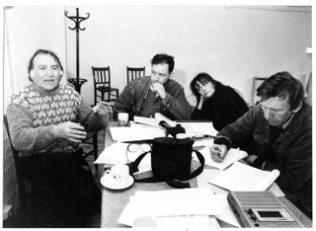 The former Docker watches the actors with a beady eye and the occasional slight shake of the head. He has been brought into rehearsals to check that all is accurate. Two of the actors are going through a mime for picking up heavy bags of raw sugar. Rod Kerr, who spent thirty-five years in the docks, is not entirely happy. He interrupts the mimed puffing and panting and offers some advice on how to carry the imaginary heavy bags. As he does so, a phrase from the past comes back to him, like a cork bobbing up from the murky depths. “Get yer ’ump under this” he says. That, Rod assures the actors, was the common cry as a Docker steadied himself to receive a crushing load on his back. Rod’s suggestion is written into the script … Rod was to prove a fund of useful tips. 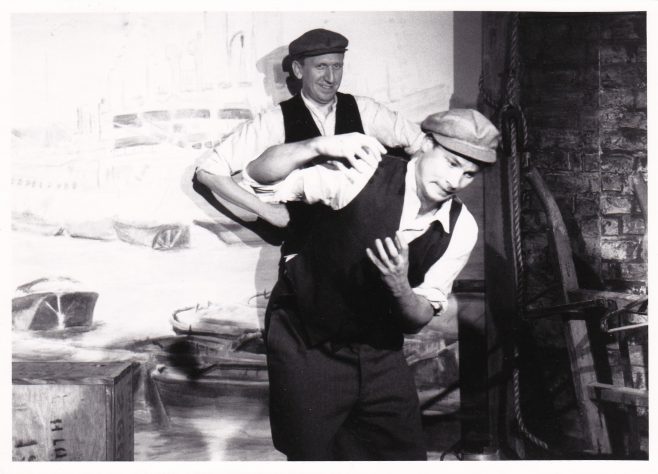 Ideally, every performance should be followed by a discussion between the theatre company and the audience. This can be a totally informal affair conducted between actors and audience members in small groups over a cup of tea, or it can be more formal discussion with a facilitator. It is likely that many memories will have been stirred, and this is a time for sharing the reminiscences and the emotions evoked by the show. For the performers it is a unique opportunity to experience direct contact with audience members and to feel how their show has built a real connection with individuals within it. 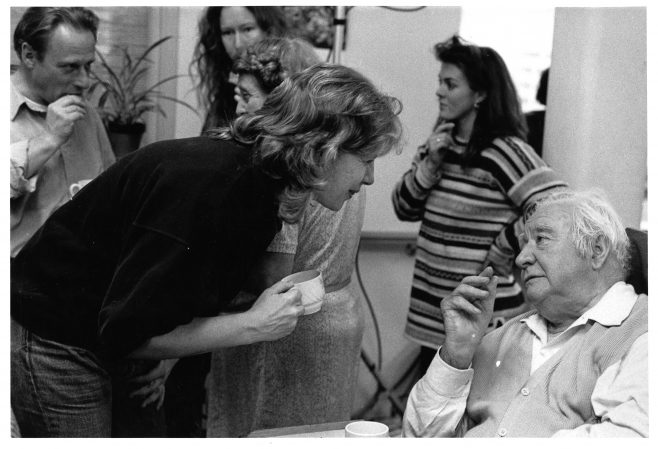 Post-performance discussion to hear how the audience has responded

Often the audience members continue to associate the performers with the parts they have played in the show and feel very close to them. These often low-key exchanges are an important part of the reminiscence theatre process of gathering memories, structuring them into a play with live music, rehearsing together and then feeling the effect on the audience’s collective and individual memories. 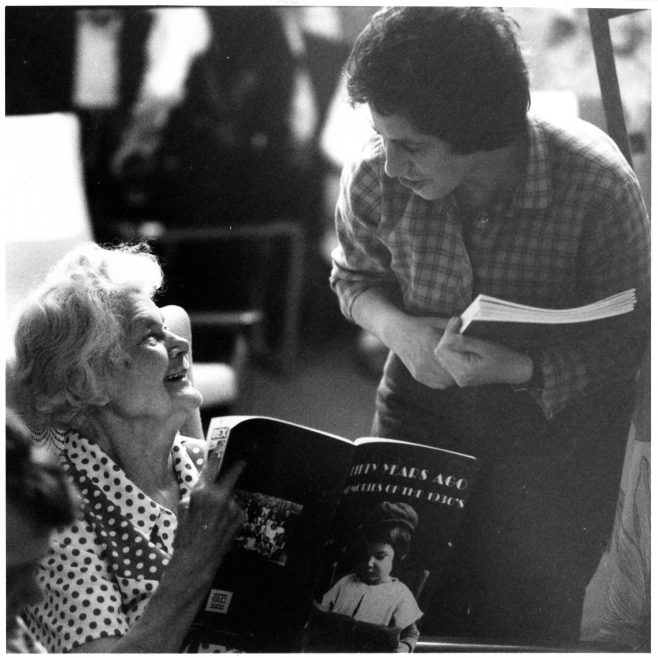 9) Finding a way to prolong the remembering process

It is highly desirable to make available at every performance some of the collected memories that have gone into the making of it. The publication of edited stories and donated photos is a perfect way of prolonging enjoyment of the remembering process, and it gives audiences a chance to remember at more leisure after the show is over, with strong additional stimulus. This also gives the venues where the show has been performed the opportunity to set up reminiscence sessions as a follow-up activity. Otherwise, recordings of the show or small, easily erected exhibitions of memories and photos which can be left behind for a few days can also stimulate memories amongst audience members and venue staff.

10) Wrapping up reminiscence theatre projects so they have a future

The stories we collect for reminiscence theatre projects have a value, as does the artistic work stemming from them. It is important to label and store safely the material generated, as it is likely that it will increase in its value to the community.

My own experience has been that everything that has survived from thirty years of reminiscence theatre work (some of it more by luck than judgement) has come into its own as part of an emerging archive of memories and performance now held at the University of Greenwich. However, it has also highlighted for me the importance of wrapping projects up in an organised way, with digitised and physical records clearly marked and saved in more than one place. This will help to ensure that it will be accessible and useful to scholars, students of reminiscence, oral history, intercultural studies and community or applied theatre in the future. 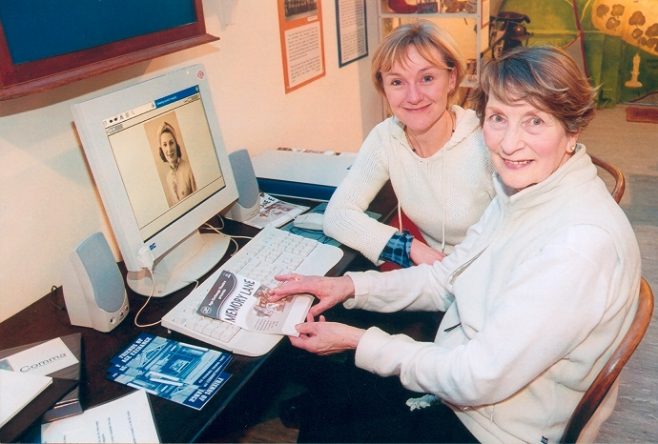 Jules Davidson works with Olive Amos, whom she will play in the show ‘Memory Lane’ (2003)

It is gratifying to note that reminiscence theatre has found its way into the curriculum of many drama schools and university drama departments, so the archive at Greenwich is likely to be well used. Indeed, I am especially happy that it has already been mined by Greenwich University students of Drama as a source for making new short plays which have been performed to older people in local sheltered housing units and clubs. I had not anticipated that the archiving process would enable a whole new raft of reminiscence theatre productions, which has proved stimulating for students and older people alike. 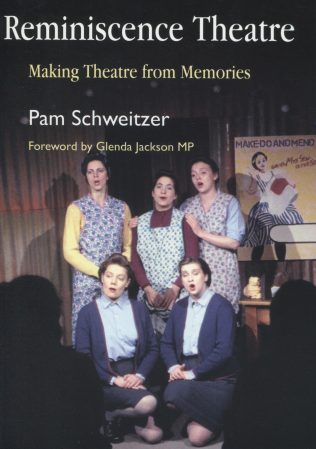 If you wish to read more about the process of making theatre from memories, you will find detailed accounts of many of these shows and others in: Schweitzer, P., Reminiscence Theatre: Making Theatre from Memories (2007), London and Philadelphia: Jessica Kingsley Publishers.