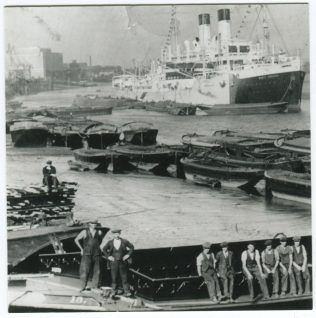 Andy: You were a stevedore, weren’t you?

Bill: We were the elite.

Andy: The show is about memories from docklands and it’ll be interesting for kids in schools who don’t know anything about it, but it’ll also be interesting for older people because they’ll remember what it was like before the speculators came in. One of the things we don’t know is, what was the difference between a stevedore and a docker. We know the stevedores were the top ones… So what was the difference?

Andy: What was the difference between a stevedore and a docker ?

Bill: The stevedore loaded the ships. And discharge. But the dockers really done most of their work on the quay. And also (I mean, I’ll probably be killed for saying things like this, but it’s true) if you was a shipping agent, and you insured that cargo that went out, if it was loaded by stevedores the rate was cheaper than it was if it was loaded by dockers. Because it was safer. This is a fact. And I mean they don`t like it. And the other thing is that we were the second oldest union in Great Britain. The Dockers Union (which was The Transport and General Workers Union) they did everything to try and smash our union up. They even offered a golden sovereign to every person who would leave our union and join their union. This is how they become great you see.

And our constitution is founded from our own government. Our constitution is very democratic, see. And when we went to work in the morning we never used to show our card, dockers card, we always showed our union card. And if, say for instance you forgot to bring your card out, and I wasn’t at work, and I was what they called “Shaped in the Road”… the foreman always stood in the road. The foreman and all the celebrities used to stand in the middle of the road. And we all stood on the pavement like that. On the pavement, you dare not walk off the pavement (this was the stevedores you see) and the foreman would come out and he’d call the men. He might say, “Brown, Smith”. And you’d all be pushing and shoving. And as I say we used to hold up all the buses that used to come by, all the traffic was held up, while we was “Calling Off”. You see, as I say, your foreman stood in the road. Well we was so, what can I say, “Democratic”, that if you never had your union cards you didn’t go to work. You always pulled it out and you could demand the union foreman to show his card.

We also had, if you did something wrong in the union, such as … if you was piece work, you had to stay on that job. If there was plenty of work about and you thought, “Ooh there´s a better job up there, I can earn more money on it”, you couldn’t do that. But some of them did. And if they was caught they was taken in front of not the masters but men like me, who was a delegate.   And you sat round a table and discussed… it was a proper, just like judge and jury. And if you was found guilty you was probably fined £10, which in them days hurt your pocket. So discipline in our union was really strong as opposed to the other union you see. And if you didn’t pay your contributions in our union, after three quarters, you used to pay so much a quarter, then you were erased and you couldn’t work in the docks. You lost your card.