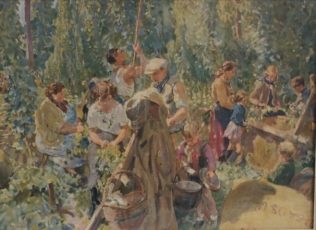 D: What’s your association with the hopping?

H: I was a railway guard at a place called Stewarts Lane, and we used to get a lot of spare jobs, and hopping was always considered a spare job, because it wasn’t a set routine.

D: Was that the job of being guard on the train?

H: Yes. So, all the hopping stock that they used for the hopping train was very ancient and it was kept at South Bermondsey, which is Brick Layers Arms, and there it was just not touched from year to year, it was only really used for hopping.

H: It was so ancient. And kept in special sheds down there. Those days a guard had to look at his train, inspect it before there was even an engine attached, and most of the bogeys were built in 1800 and something. The actual rolling stock on top, the carriages, they were later. Some of it as I say was pretty ancient. It was our job to get it out from there and used to bring it up the Smoke and then reversed your engine round and you went into London Bridge which was termed Low Level – it’s a terminal part – in those days it was just called London Bridge Low Level, and you went in platform 8 and 9 and there you had all your hoppers waiting.

H: This is it. Most of them, they come up from places like Stratford, West Ham and that. Some of them had pushed prams all the way up from Canning Town and right the way over, over the bridge, and we used to have extra vans put on the back, just to take all their…

D: Was it an ordinary carriage?

H: Ordinary carriages, but on the back, you’d have three what we called PMV vans, which you just filled up with all their – I mean, the train was only going to places like Paddock Wood and terminated there. You had plenty of time, then everybody came to get all their belongings. A lot of them’d just have the old galvanised baths, they used for the wash on the Friday night, and that was filled up with all their stuff. And one held one handle and the other the other one.

D: So, they put all the big stuff in these trucks in the van? H: That’s right.
D: And then they’d all pile in.

H: That’s it, then they’d just go down. like a day out at the seaside, all in these compartments, then we all unloaded it when we got to Paddock Wood. Yalding was another place we used to go. I can remember going down once on the Hastings line, which the tunnels there are probably altered now, but in those days they’d only take certain stock because the tunnels hadn’t been built to take all the – the size of the tunnel, you had to have special stock to get through. Nobody thought to check them on these, and they were so old they had chimney pots on top, they were to let the air in. But when it came along to the tunnel it knocked all of these things flat. And that was the hoppers train.

D: Was it deliberate policy to have old battered up stock for the hoppers, was that because it was an extra train, or because the hoppers were scruffy?

H: Partly both I suppose. It was only used on those occasions. Maybe they didn’t look after it all that well, but there was never any damage done on the few that I took. I can remember going vividly to Paddock Wood, that was the main sort of hopping area. And the trains there. Very often they’d be picked up there, and one or two you’d see just trudging off. It wasn’t unusual because I used to work in the Surrey Docks a bit later on and there again, hopping was on its way out, but there were still people going down but from there they used to have the lorries, picking them up and you used to get the whole family on them, they had the piano on the back as well, all ready to get a tune out of the piano.

D: People have told me a lot of stories of trying to fiddle the fare on the hopping train, were you aware of much of this going on?

D: Did you ever catch anybody?

H: No, never. They put on ticket inspectors at the station, so they’d probably be pretty alert. London Bridge was easy to get on, because you had not only the barrier, but you could come across the footpath, the foot way thing over the top, from other platforms and get down to where the hopping trains went from. The trains, one or two were corridors, but the majority weren’t even corridor trains. So again, you couldn’t get any ticket inspection on the trains, but they could at the terminal station. I don’t think they tried all that hard anyhow to stop them.

D: Was it a special fare for the hoppers?

H: It was cheaper. In those days you had very few concessions that you’ve got nowadays. You had a workmen’s’ ticket early in the morning. This was going up to London and that, and if you left before 7 o’clock, you got what was termed a workman’s ticket, and it was very cheap, and they did away with that. But other than that, you didn’t get the concessions as you have nowadays. But it was a slightly cheaper for them. Most of them went and got it a couple of days beforehand, you’d see them queuing at London Bridge and places.

D: So, this was like a pass, they’d have to get that to get on the train?

D: When were you working?

D: You weren’t there before the war, were you?