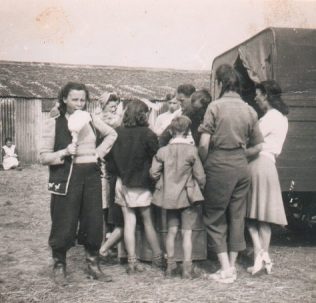 J: But my name was Hills in those days. I used to be Joan Hills when I was hopping. We used to get down there after the train loads came down from London.

D: You used to live in Maidstone?

J: No, I used to go down from a place called Stone, near Dartford, for a holiday with my grandmother who lived down there. And for a day out, several times, during that fortnight, we would go hop picking, with aunties, two aunties. And don our aprons. Because the hops stained clothes, a brown stain – your fingers are brown when you’ve finished hop picking, and you have to get them off with soda and stuff, all sorts of things we had to use. It was very hard to get off, we had to scrub them off. And grandma used to put soda and hot water in the bowl, and we used to scrub them until they came off, you know, and they’d wear off in time. But the hop pickers hands were brown at the end of the season – apart from being brown with the sun, because the weather always seemed to be warm in those days except for the sharp showers. And their hands were stained brown.

D: How long did the stain last then?

J: If you were there for six weeks hop picking, the people who came down from London – you didn’t have a lot of washing water there, there were no taps laid on in the huts they lived in – and I suppose when they got home it wore off working and doing the washing. Don’t forget everybody did their washing by hand in those days, so the mothers would easily get rid of it in the wash day, with soda in the water and that soap that had soda in it. But we used to go down there for the day and get there about seven o’clock, and hour’s walk, and that was nothing for children in those days. We used to take one of the prams with our food in for the day, because you eat enormous amounts of food when you’re young don’t you, especially when you’re hop picking because it’s a very hot job. It’s not hard in the sense that the labour is hard, it’s the continual picking, because they don’t stop picking. You see the people who went down there to hop pick did it by bushel loads, or two-bushel loads; well they had to keep picking because they wanted the money. But as we were going down there for the day, it didn’t matter to us very much if we earnt a lot of money or not, it was just for the day out. But you pulled the bine by pulling a string – you were shown how to do it; children were allowed to do it. And once you pulled that string, the bine came down over the hop sack troughs. There was a trough about twenty-foot-long with poles holding the side pieces and struts at the bottom. And they had big bins made of hop sack hanging in between the poles, made of a sort of hessian stuff. And you picked the hops into the thing. And children of course, they’re either good pickers or bad pickers; the good pickers didn’t pick any leaves with it. And if one of the men, the overseers, came along to collect what was in that bin – every so often they came round with the cart, weighed the stuff. Put the name down of the pickers – and a lot of them used to share one pick, one of these bins, and then share the money out. But if they found a lot of leaf on the number they’d put down in the row that you were in, they used to come down and tell people off and say, “We’re not going to give you so much a bushel because there are leaves in there, and we don’t want leaves

going into the hops.” So, if you were a cleaner picker – and a lot of the people that went down there from London and did it habitually were very, very quick, and clean pickers. Children are apt to put leaves in, so they weren’t encouraged to pick many. So, most of the time we ran round the fields and we played with the children who came down from London. The thing is, a lot of them didn’t have shoes on they had their bare feet and they weren’t encouraged to wear shoes down there in the mud, so they didn’t have any, so of course they used to like to try our shoes on, and we used to sometimes lose our shoes because they took them! They’d just take them off them. Because they were cuter than we were, don’t forget, they had to be. But we used to run, running up and down the lines and getting in everybody’s way and being told off. It was all fun though. Nobody ever got really bad about it, because the people there seemed to love the children because they all had children – all big families. If there was any swearing, I didn’t hear it, or I didn’t notice it. But my mother told me there wasn’t an awful lot of swearing in those days in front of children. Not a lot. The odd word. Not all the time. Seemed to be able to keep that for the public house or somewhere else. But we really enjoyed. And then you see people fainted because the sun was so hot and the fumes were, the aroma from the hops between the rows used to be with the humidity, got so strong that some people would faint across the bin. And then of course there was always somebody there with the Red Cross on their arm and they called for them and they came along and they put sal volatile under their nose, the smelling salts. Always took smelling salts with you when you went. My gran used to say, “Get my smelling salts off the dressing table.” to me. Because somebody was going to faint. I think it must have been getting in a closed area with the hops because they’re about ten or twelve feet high I should think. And the men walked about on stilts. The people on the hop fields, when they tied the bines up, when they were getting long, they used to go along the rows on stilts and they were very apt at walking with these stilts. And we used to try these stilts on the edge of the field, try and get on them. And some of the boys, the Londoners, used to be ever so good at going on stilts. They used to climb up there and get on the stilts and they’d be walking along.

D: Were they the sort that you tie your feet into?

J: They didn’t. They had a long pole that seemed to come up under their arms and the step for their feet was down step level. So really speaking they were holding the sticks with their arms and guiding themselves, sort of moving the stick with their hand as they walked along. It was a marvellous contraption really.