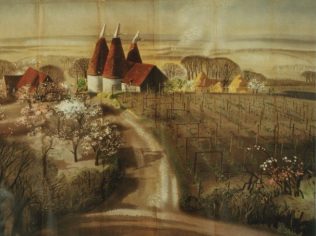 P: 16th July, and I’m talking to Ellen Tucker. At the Reminiscence Centre.

P: How old were you when you first went hopping?

E: I would have been about five. That was the first-time mum went. I can remember playing around in the fields, because we lived in Town. We lived in Finsbury at that time. Boswell Road. The Angel. That would have been about 1937. The war came ’39, and I went to live with an aunt, my father’s sister at Luton. And once during the war she got this yen to go hop picking – my aunt. My mum was living in London. And she suddenly said one day, “Well, we’re going hop picking.” And off we went from Luton down to Kent. That was about ’44 I should think. I was getting quite big then. I don’t remember a lot about it, but I know it was the same old thing, everyone from London Bridge, and off to thing. And then I don’t remember any more much until then. I know when I went to work, I used to have to give up my job every September because they went hop picking and my father wouldn’t leave me behind – I had to go as well. When I first started work, I was 14, it was dress making, learning to sew, everything done by hand; buttonholes, and hems and in this factory, there were no machines. We were at Pentonville Road, Islington, but their main office was down near St. Paul’s. But then I left that and decided I would go into clerical work. I still used to lose my job every year because father insisted, I go hop picking.

P: They wouldn’t give you a paid holiday?

P: Did you ever try to go back to the same job after?

E: Yes, but they’d always given someone else it. In those days you could walk in and out of firms and go and get another job. There was no problem finding a job. I started work about ’46.

P: So, the first time you went hop picking was before you left school, and that was ’44-ish, when you went with your aunt?

P: And ’46 you were already working; and did you feel okay about having to give up your job?

E: Well I would have liked to have been a grown up and stayed at home on my own. But then everyone else had gone, so there was no question of being left behind.

P: Did you enjoy going hopping?

E: Yes, I used to like it when I was there, yes, we used to have our campfire at night, sit round. And then it was the skiffle groups were in vogue then.

E: A tea chest, and a broom and a washboard. We used to have great fun.

P: What songs were they doing then?

E: The one with the whip. Ghost Riders in the sky was one we used to sing. Yippee-yi-ay. Those type of songs. Lonney Donigan. It was really an old tea chest and a broom stick with a lump of rope.

P: For a double bass.

E: Yes. And a washboard. We didn’t have anything like a guitar. My uncle George he was very – he should have been on the stage really. I suppose today he would have been – he could play any instrument he got hold of. And he was a marvelous comedian, standup comedian. Very clever.

P: What instrument do you remember him playing?

E: He had a mouth organ, he could play a piano, if there was one there. Anything that came to light. And my dad used to play a mandolin.

P: Where would this music be happening?

E: We’d sit round the fires. But everyone in those days had an upright piano in their front room, and all my dad’s family they all had a natural ear. They sat down and honkey tonk tunes you know.

P: What about when you went hopping though, you wouldn’t have a piano there?

E: No. It’d be a mouth organ and skiffle board. Just make combs and paper; anything that makes a noise. I used to sing when I was – I had quite a good voice when I was young.