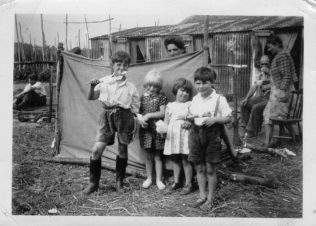 F: They were all part of the farm, I think. I wasn’t on Whitbread’s farm, I was at Whitestone, which was further down the way from Whitbread’s. These special men they used to come round just to pull – they had big poles – they used to pull the bines down ready for you to pick you see. You had to be sure and put all hops, you went like that, you had the hops and tried to leave the leaves, because if you had too many leaves they’d knock so much money off of what you’d earned.

D: Because it filled up the bushel?

F: Yes, you see. Now and again you got some leaves, but you weren’t supposed to put too many leaves in you see, and these bins, like a sacking thing with a cross piece, what we used to have to stand and pick at. We used to be out there at 6 o’clock in the morning and take everything on a push thing. Everything you needed for the day was all put on that and taken.

F: Yes. And then they give you a signal when you’ve got a restart. And during the afternoon the lolly man used to come round, not ice cream, sweets, like lolly things you know. He used to call out, “Lollies.” and if you was good you were given some money to go and get one. No toilets, not real toilets. They was just in the hedges they dug great big holes and a little bit of sacking thing round. So that was your toilets; this is how rough it was then.

F: I expect I did mind, but at the time being a girl, I was only about 11, but everybody was the same, so we all had to do it. So that was that. And then you finished about 4 o’clock in the afternoon. And this hut we had we were lucky we had two storey hut. But you used to take a lot of bits of your own furniture these hoppers did and kept them there from year to year if they went regularly. You know, a table and a couple of chairs and that. And the great big hopping pots.

F: Big ones, great big ones. And opposite your little hut there was like a corrugated shed with a bar across and you lit your fire there and you cooked all your stuff out there you see. But on Sundays you all went down the village and took your roast to be done in the bakers down there.

D: Did they do that for you?

F: I don’t know, I expect we had to pay, but I didn’t have anything to do with that side of it. But weekends my mother and father came down to perhaps visit us, and there was all this great big pot all full of stuff all cooking for us, big spotted dick, and all different things. And we all used to have a sort of picnic outside the huts. But she had, this lady had her sister with us, so that was her and Mrs Gill and the baby and I, we slept in one part and the boys slept in another part of it. It was all straw and hay; it wasn’t real beds or anything you know.

D: So, did you have to make up your beds every night?
F: It was there, you just put a cover over it and laid on that. D: A lot of you all squashed together?

F: Oh, it was really, you didn’t have room to comb your hair and no proper wash or anything – I forget what the washing facilities were like now; we must have had a wash, but we never had a bath. For the three weeks I was down there we never had a bath, and never had my head washed either. And the saying was true literally, you go down hopping and you come back jumping, which I did. My mother had to de-louse me when I came home. She did really.

F: I expect she did mind, but I always remember the boiling hot vinegar, she used to put the comb in and do all my hair with it until she got rid of them all. That’s how it was in those days you see. But everybody was happy. We used to sing our heads off there. They used to say, “Go on Flo, start us off.” I was only young, and all the old ladies used to sing all around us. Not many children did pick, only those with very big families, because they wanted the money. That was their holiday money actually, which you earnt, but it was all their holiday money for them.